Many of us were witness to Zion Williamson blowing through his Nike sneaker Wednesday night, about 30 seconds into the Duke / North Carolina rivalry conflagration. 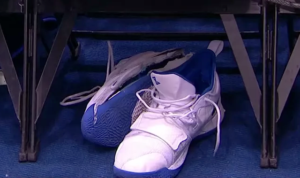 But, back to the shoe, I don’t know how Nike shoes are made, but that rip sure looks fabricated to me. My stepmom was a fabulous woman. One of her talents was sewing. She had a sewing machine and lots of other sewing equipment. One particular tool she had was a mean looking thing called a “seam-ripper.” Looks to me like maybe someone went to town on Zion’s shoe with one of these things.

This all comes at a convenient moment in the nexus between college hoops and the National Basketball Association (NBA), when the NBA is considering lowering the NBA draft age from 19 years old to 18. If approved, this arrangement would effectively end the “one and done” rule in college basketball. And our reliable Commission-sitter who will always deliver the goods for whomever has hired her, Condoleezza Rice, is referenced as suggesting the one-and-done rule is obsolete.

Now we are treated to Boogie Cousin’s opinion on this debacle and at the bottom of this story, the author reiterates the importance of playing at least one year in college, as our pal Boogie did at Kentucky. This argument will fall on deaf ears.

I recall a couple of guys who didn’t play college hoops and went on to be big stars in the NBA. You might remember Kobe Bean Bryant and likely know about a guy named LeBron.

Frankly, I don’t care whether Lord Zion plays another minute of college basketball in his short college career, or not. The sport will go on without him and the sun will still come up in the East, tomorrow. But the fans get cheated.

Yet, this all looks to me like a smokescreen for the NBA to get what it wants. Which is, to have all the talent flow to it directly, so the NBA can continue to build its brand. Kobe and LeBron going directly to the NBA sure didn’t hurt college hoops and neither will Lord Zion’s disappearance after his first season.

But with all the new “gambling” money sloshing around in places it never sloshed around in before, there is bound to be a huge monetary advantage to the NBA to get star athletes to come directly to the NBA and get paid. Remember, Commissioner Silver is just fine with gambling on his League. This is not a coincidence.

Take a Tour & See for Yourself